INTRODUCTION: ‘Un’ is a prefix meaning “not,” freely used as an English formative, giving negative or opposite force in adjectives and their derivative adverbs and nouns (unfair; unfelt; unseen; unrest; unemployment). Last week my sermon was about our unchanging God. During the week I watched a little clip highlighting other ‘un’s that pertained to our God and I thought it would be good to expound on some of those. This week we’ll look at how God is unequaled.

The first chapter of Isaiah starts out with a declaration of the people’s rebellion against God, consequences for such, a call to repentance, finishing with prophetic statements of restoration. Chapter 39 ends with Isaiah revealing to King Hezekiah that the nation would be taken captive by the Babylonians. But chapter forty begins with God commissioning Isaiah to proclaim that when the consequences for their rebellion is over there will be comfort for the people. Within this chapter we will see the ways in which God communicates his preeminence to his people.

God wanted his people to know that no matter how powerful some people are, no matter how long they stay in power, they are like withering grass. No matter how rich someone is, no matter how glorious they seem, that too, will come to an end like a flower of the field. Why? Because it’s the Lord who determines when their end will come. No amount of power, no amount of money, no amount of prestige is able to overcome the power and glory of the Lord.

The Jewish nation would be taken over by the Babylonians. King Nebuchadnezzar was a powerful man who gained control over a vast region for many years. During their long captivity I can see the Jews wondering if anything could stop this Babylonian king. But they were shown God’s dominance in two ways: first, when Nebuchadnezzar became proud, declaring how great he thought he was, God removed him from his throne; showing this king who was really the King! And then God fulfilled his promise to his people by delivering them and reestablishing them as a nation.

This is important for us to understand because when the powers that be-whether it’s the government or our boss or a bully-seem unstoppable they are not. The only thing that is unstoppable is God. The only thing that is unceasing is God. Kingdoms crumble and empires erode but the reign of God never ends. That’s important for us to understand because no matter what happens in our world, no matter what decisions are made, no matter what laws get put in place, nothing is completely set in stone; God is the one who has the final say.

So when we’re oppressed we can have hope that deliverance is possible; that change can happen. When tragedy strikes and we wonder how we will ever be able to pick up the pieces; when we get devastating news and we want to give up; when the circumstances in life seem hopeless; when things look bleak, when it seems as if there is no way out-no light at the end of the tunnel we need to remember who is in control and who has the final word. Circumstances may be outside of our control but they’re not out of his. God has dominance.

Isa. 40:10-11, “See, the Sovereign LORD comes with power, and his arm rules for him. See, his reward is with him, and his recompense accompanies him. He tends his flock like a shepherd: He gathers the lambs in his arms and carries them close to his heart; he gently leads those that have young.”

It’s interesting that we find the words ‘power’ and ‘gentle’ in the same passage. What a picture of God. We need this picture because we could get overwhelmed by God’s great and awesome power. We could forget that the God who created the universe cares about me personally. We need to see both sides of God for the purpose of revering him but loving him at the same time. We need to understand that God wants to hold us near in love and gentleness but that doesn’t mean he’s just an ol’ softy. We shouldn’t take God’s gentleness for weakness. God is tender but he’s also tough. That awareness will keep us close to him while at the same time keep us in check. 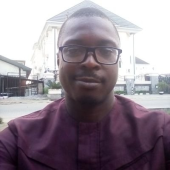 I am the quintessential nerd that loves erudition and propagates success wherever I can. I am a web developer, software creator, actor, writer, director and public speaker to name a few. I am currently the CEO of Wilson Web Service and own shares in numerous start-ups. You can reach out to me on 09056134332 if you so desire

HOW CAN WE HELP YOU?

Contact us at the Acumec WP office nearest to you or submit a business inquiry online.

We are just a mail away.

Get latest updates and offers.